What people say about the LTC insurance they bought. 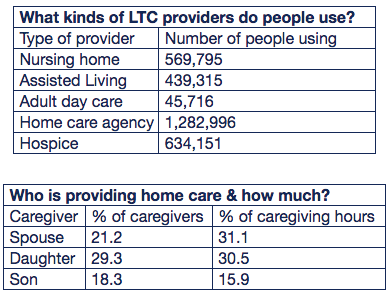 About 15% of the claimants surveyed said the claim-filing process was difficult, but 78% said it was easy.

Where the claimants receive care:

Relying on telephone interviews of claimants might have affected these statistics: People who live in a nursing home might be more likely than other users of long-term care insurance benefits to have trouble with talking on the phone.

But only 17% of the claimants who participated in the survey were living in a nursing home.

31% were in an assisted living facility, and 45% were still living in an ordinary private residence.

How the coverage has affected where the claimants live:

About 39% of the claimants said they would be getting their care in the same place where they were at the time of the interview even if they had not had long-term care insurance coverage.

But 47% said their long-term care insurance made getting their care where they were at the time of the interview possible.

About 64% said they would have had to rely more heavily on family, friends and volunteers if they had no long-term care insurance.

How the benefits compare with the cost of care:

Typical current long-term care insurance claimants may have purchased their coverage back when premiums were much lower than they are today, but their $45,000-per-year benefit looks low by current standards.

In spite of that, the answers the claimants gave tend to support the backers of the "something is better than nothing" position.

About 93% said their policy benefits are meeting current care needs, and 88% said they were satisfied with the amount of coverage purchased.

Whether you will need care or not and for how long is yet to be determined. If and when it happens, will you be prepared to cover the cost?


Get started, get a quote.

The majority of caregivers are family members.